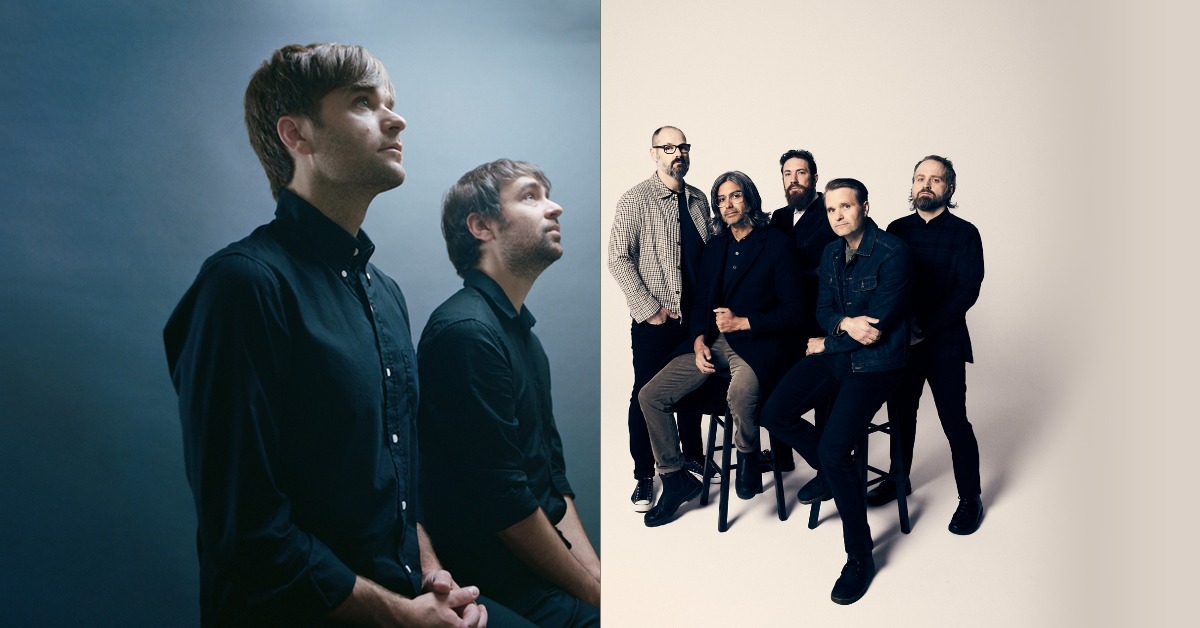 You can spend all the time and money in the world trying to craft the perfect pop-music scenario, but sometimes the stars have to align all by themselves. Even though early on the members of The Postal Service jokingly referred to "Such Great Heights" as "the hit" on their debut album, Give Up, there's no way anyone could have predicted the eventual impact made by a mail-order album designed in a pair of West Coast bedrooms.

It's been 10 years since the little project that could from Seattelite Ben Gibbard (also known as Death Cab For Cutie's frontman) and Angeleno Jimmy Tamborello (Dntel, Figurine) emerged from seemingly nowhere and began to burrow its way into the ears of anyone who came into contact with the band's infectious electro-pop. To celebrate, Sub Pop is reissuing The Postal Service's one and only album, including in the multidisc set B-sides, rarities, and two brand new songs, "A Tattered Line Of String" and "Turn Around." Equally noteworthy is the announcement that the band is back together, at least in 2013: The Postal Service will hit the road for a long-overdue victory lap, one that will give most fans their first (and last-seriously, don't ask) chance to see the group in person.

Of course, the music that The Postal Service created was more than just electro-pop, and the force with which Jimmy and Ben captured the indie-rock zeitgeist of the early aughts made them more of a phenomenon than just a regular old band. The guys exquisitely matched synthetic sounds with organic ones, a marriage that also brought together a fanbase spread out across the musical spectrum. The fact that such artists as Ben Folds, Amanda Palmer, Streetlight Manifesto, and Confide (who knew Cookie Monster liked The Postal Service?) have covered "Such Great Heights" is a testament to both the song's magical spark and its melodic inclusivity.

The Postal Service's story started innocently enough, with a mutual friend bringing Ben and Jimmy together to collaborate on "(This Is) The Dream Of Evan And Chan," a track on the 2001 Dntel record Life Is Full Of Possibilities (whose 10-year anniversary was also commemorated with a Sub Pop reissue). Things went so swimmingly that by the next night Ben asked Jimmy if he was interested in working together again.

"We got along well right away, but I don't think I would have asked him to do it that fast," says Jimmy. "I'm glad that he asked."

And once they started sending CD-Rs to each other through the mail (hence the band's moniker), the momentum didn't stop: Every month or two, Jimmy would ship off a couple of electro skeletons, which Ben would flesh out with vocals, guitar, and whatever else felt right. The process was pretty seamless, and in less than a year they had an album's worth of music.

"All the songs were written pretty quickly," says Ben. "He would send me a disc with two songs on it, and then I would turn them around within a week or two. For whatever reason, I was just really responding to what he was sending me."

Once Jen Wood and Rilo Kiley's Jenny Lewis added vocals and the mixing was completed-a process that actually brought Ben and Jimmy together in the same room-they were ready for their close-up. Jimmy suggested naming the album Give Up, inspired by the transitory nature of the whole arrangement.

Jimmy says that he originally thought the results would skew more experimental, à la the glitchy sounds he makes as Dntel, but by the time they were working on their first two songs-"The District Sleeps Alone Tonight" and "Brand New Colony"-it was obvious that they were making a bona fide pop recording. The sweetness of Ben's voice perfectly complemented Jimmy's upbeat orchestral thumps, and songs like "District," "Such Great Heights," "Nothing Better," and "Clark Gable" jumped out of the speakers and demanded attention from the head, heart, and feet. Ben also let his usual brokenhearted lyrics share space with some of the most playful words he'd ever penned, noting back in the day that "Such Great Heights" was the first time he'd written a positive love song.

Sub Pop told the guys that Give Up might sell 20,000 copies, but that seemed a tad optimistic. To help with promotion, the label lined up a couple of its heavy hitters to do acoustic covers for the first single, "Such Great Heights": The Shins tackled the nuclear-apocalyptic drama of "We Will Become Silhouettes," while Iron & Wine reinterpreted the A-side.

A monthlongU.S.tour was booked conservatively, and their accommodations were far from luxurious: Jimmy, Ben, Jenny, and Nick Harmer (Death Cab's bassist who ran the onstage visuals and ended up playing tour manager) were crammed into two beds. ButGive Up started to blow up while they were on the road, and by the time things wrapped up, the band had gone from opening the tour at the tiny Casbah inSan Diegoto upgrading itsLos Angelesshow to the much larger Avalon. The energy continued to build when they headed overseas that summer.

"I remember being inSpainand having some moments that felt like The Beatles," says Jimmy. "I remember playing a show and afterwards having to run to the car and people screaming, and having to drive away with people hitting the car."

"If somebody were to talk about the year that indie rock broke, it would probably be the fall of 2003," says Ben. "With The Shins or with Death Cab or Modest Mouse or whatever, all of a sudden this culture that we had been a part of kind of quietly without any ambitions, without any expectations that there would be any kind of mainstream success, we all of a sudden became sucked up into mainstream culture in this way that at the time was really unexpected."

And the story just kept getting nuttier: The Iron & Wine version of "Such Great Heights" ended up on the Grammy-winning Garden State soundtrack (the original was also used in the film's trailer), and eventually the band's profile was high enough that it grabbed the attention of both Teen People and the U.S. Postal Service, the latter of whom sent a cease-and-desist letter regarding the group's name, which led to Sub Pop's first and only story on the front page of The New York Times. (The agreement that allowed The Postal Service to keep its name included, among other things, a performance at the postmaster general's National Executive Conference, the U.S. Postal Service selling Give Up on its website, and a morality clause that said the USPS could take it all away if Jimmy or Ben ever did anything significantly naughty.) By the time the band got upset at Apple Computer for its commercial that was essentially a shot-for-shot remake of the "Such Great Heights" video, it seemed as though basically anything was possible.

But over the years, it's become obvious that Give Up captured a very unique moment in time for these talented musicians-"I felt like we just captured lightning in a bottle," says Ben-and sometimes it's best just to leave well enough alone. That said, a couple of exceptions are the reissue's two new songs, which were started in 2006 and deemed stellar enough to be finished up for inclusion on Give Up's second go-round. Both pick up where the album left off, with Jimmy, Ben, and Jenny firing on all cylinders to make a pair of memorable, energetic tunes. While "A Tattered Line Of String" bounces along to a bittersweet fairytale ofNew Yorkfilled with doomed love, "Turn Around" could almost be seen as the sequel to "This Place Is A Prison," with Ben promising to stick by someone drowning in drugs and booze. (The latter's coda is also dreamy enough to give the ending of "Brand New Colony" a run for its money.) Along with the other bonus material-which includes, among other things, the Shins and Iron & Wine covers, Ben's acoustic radio performance of "Recycled Air," and The Postal Service's covers of The Flaming Lips' "Suddenly Everything Has Changed," John Lennon's "Grow Old With Me," and Phil Collins' "Against All Odds (Take A Look At Me Now)"-these new songs bring gorgeous closure to a pristine project.

As for what everyone has planned after this year, they'll inevitably remain busy, just not with each other. Jimmy continues to flourish musically as Dntel, and I don't have to bother detailing Ben's success with Death Cab and as a solo artist, not to mention what Jenny's done with and without her bands.

And really, The Postal Service's legacy is best left in the hands of the million-plus people it's affected. (And that's a literal number, as Give Up, Sub Pop's second-best-selling album behind Nirvana's Bleach, recently went platinum. It's also worth noting that The Postal Service has received more radio play than any other artist in Sub Pop's illustrious history.) And I'm not just talking about listeners: The band's sound is such a touchstone for so many artists that "Postal Service-esque" has become a generally accepted musical adjective. And it goes way beyond Owl City.

"I think it is continuing with the tradition of electronic pop that was popular when we were kids in the '80s, and that people kind of walked away from for almost 20 years," notes Ben. "If not the first, we were certainly the first visible act to revive this genre and kind of modernize it in a way that was a reflection of kids who grew up on Pavement but also grew up on New Order and Pet Shop Boys and whatever else. Nobody had checked off those boxes on the same record."

Back when I wrote the original bio for Give Up, I compared Jimmy and Ben to such famed pairings as Morrissey and Marr, Lennon and McCartney, and Suede's Brett Anderson and Bernard Butler. To borrow a line from "Such Great Heights," it may have seemed like a stretch, and at the time I had no clue how massive this would all become. But it was obvious that these guys had made something special, and it's amazing to know that so many other people have come to agree.